THE AUTOMATION is about to hit 50 reviews! Read it for free and leave us one. 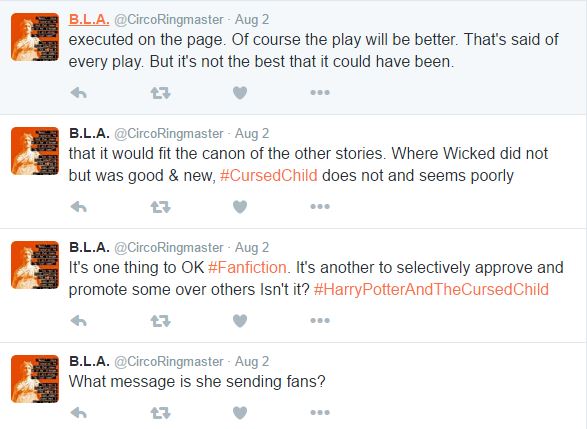 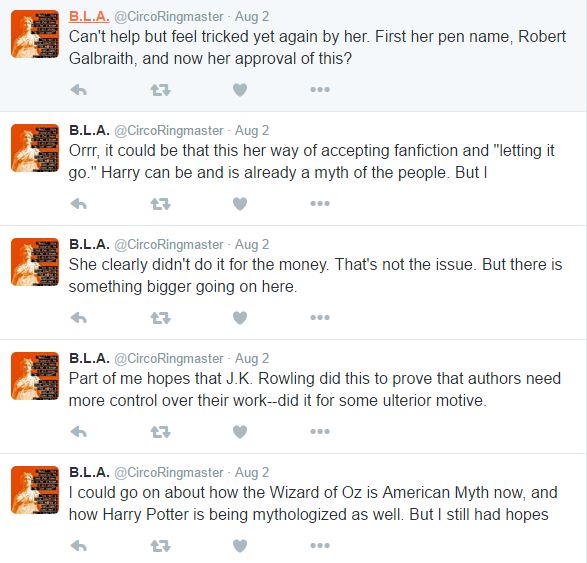 Indeed, why did J.K. Rowling not think that her screenplay for Fantastic Beasts would be enough to delight readers? We’ve waited this many years for something for her that is “Harry Potter” — that would have been enough. Why would she give up more of her rights and her story to a play that was so sub-par? Did Jack Thorne and John Tiffany blackmail her? Is she trying to prove to us that she isn’t perfect and makes mistakes? That the fanfiction community is her bitch? What?

Indeed, where is Remus and Tonk’s child? Clearly there were some characters Rowling didn’t allow Jack Thorne to touch.

“Representations of magic and witchcraft in American history and popular culture fall into two distinct and contradictory discourses of deviance and empowerment. In the first of these, magical ability is viewed as dangerous and monstrous, an unnatural power to be destroyed in conjunction with this approach to witchcraft as threat to the social order is the belief that such power should be domesticated, brought under forcible control if it cannot be utterly eliminated. In contrast, the second body of discourse addressing representations of witchcraft is one which views magical as a source of individual power and agency, usually feminine. From this perspective, witchcraft offers a means for expression of these aspects of identity negated by larger sociocultural structures, providing an alternative means of power, oftentimes fr otherwise disenfranchised women. Notions of performativity are central to this sense of empowerment, with women self-reflexively construction their magical identities as witches, as well as focusing on the physically and socially performative process of representing self and exercising change in the surrounding world. These two categories often overlap, and, regardless of readings of good or evil, power or performativity, both of these discourse meet in the representation of Otherness; as Emily D. Edwards argues, “The witch is someone strange, a curious ‘other’ who stands outside legitimate territories to intimidate the status quo.” Any representation of magic and witchcraft in American popular culture must necessarily negotiate the dual discourses of deviance and empowerment, as well as the engagement with Otherness, reconciling these differing perspective either by critiquing or negating one of the two, or by highlighting the problematic nature of their intersection. The discourse of magic in American myth differs significantly from those surrounding gender, race, and home because perceptions of magic have not undergone the dramatic challenges and changes faced by these other themes. However, the struggle between polarized notions of magic is indicative of cultural engagement with the supernatural and, more profoundly, anxieties surrounding the figure of the powerful woman.” – The Wizard of Oz as American Myth, Alissa Burger.

One of the most hilarious things I have ever read.

View all my reviews

O’Brien is arguably helpful to the ancient myths, giving modern context to things I hadn’t paid attention to before…maybe because my mind is not as fundamentally dirty as his (where he actually “gets” myth, I tend to romanticize it — but such is the curse of a lit major).