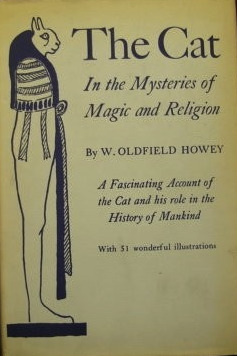 “This gives us an idea of the reverence in which Bast was held by her worshippers, and clearly exemplifies her dual nature, embracing both sun and moon, and all that was symbolized by them to the Egyptian mystic, especially the essential unity of the light proceeding from them both. As the Cat sees in the darkness, so the Sun which journeyed into the underworld at night saw through its gloom. Bast was the representative of the Moon, because that planet was considered as the Sun-god’s eye during the hours of darkness. For as the moon reflects the light of the solar orb, so the Cat’s phosphorescent eyes were held to mirror the sun’s rays when it was otherwise invisible to man. Bast as the Cat-moon held the Sun in her eye during the night, keeping watch with the light he bestowed upon her, whilst her paws gripped, and bruised and pierced the head of his deadly enemy, the serpent of darkness. Thus she justified her title of the Tearer or Render, and proved that it was not incompatible with love.

The Vulture which represented Mut (the World-Mother and great female counterpart of Amen-Ra), also appears in connection with Bast where the latter is considered as a member of the Egyptian Trinity that is recognized by the composite name of Sekhmet-Bast-Ra. This figure well illustrates the extraordinarily complicated nature of the goddess, for it depicts a man-headed woman with wings springing from her arms. And the symbolism is further complicated by two vultures growing from her neck, and lion’s claws that arm her feet.

To emphasise the lunar symbolism, the Cat is often represented with a crescent upon its head, but Plutarch would have us make no mistake. He points out that the Cat, from ‘its variety of colour, its activity in the night, and the peculiar circumstances attending its fecundicity’ is the proper emblem of the moon.

In reference to this last matter, the Egyptians stated that the Cat brought froth at birth, first one, then two, afterwards three kittens, and so on, adding on e at each later birth until she reached seven. So that she brought fourth twenty-eight young altogether, correspond to the several degrees of light which appear during the moon’s revolutions.

In chapter CXXV of the Book of the Dead, the deceased in his petition to the gods of the Underworld pleads his knowledge of a word of power.

‘I am clean of mouth and clean of hands,’ he says; ‘Therefore let it be said unto me, “Come in peace; come in peace” (12), for i have heard the might word which the spiritual bodies (sahu)* spake unto the the Cat (13) in the house of Hapt-re.’

What the mystic word is we are not told. But it is recorded that the gods of their own volition sometimes gave to mankind the knowledge of their secret names by which they might be evoked.

Here the Cat would seem to be Isis in her feline for as Bast. The ‘mighty word’ is, therefore, probably the secret name which she conjured from Ra on that occasion when, by means of a magical spell, she created a serpent whose bite caused him an agony she alone could cure. Ra had many names, but it was his hidden title that Isis sough, and finally forced from the suffering god. This name with all the supernatural powers its possession conferred passed from his breast to hers, still concealed from all other gods, even as it was from men. The legend of Ra and Isis was probably an effort to explain the newly accepted Chaldean doctrine that since even the gods were subject to law, it was possible for the man who gained knowledge of law to bend the higher beings to his will. Isis herself had shown the way. The Alexandrian writers say that the Egyptians claimed to be able to constrain the gods to obey their wishes, and messiest themselves to sight. The god could not resist the effect of their evocations and magic formulae if he would called by his true name. ‘They not only called the god by name,’ says M. Maury, ‘but if he refused to appear they threatened him.’

In the terrible ritual of the Taigherm (described in Chapter XVI) we may see the fruit of such impiety; probably the same doctrine underlay many of the feline scarifies called for in the practice of Black Magic. But when considering the motives of these it must always be borne in mind that the gods and angles of an earlier religion are the demons of the creed that supersedes it, and suffer a progressive degradation in the popular conception which finally results in the formation of a third variation of magic, frankly diabolical. The magician, reared in the prejudiced outlook of the new creed, sees devils in the ancient gods; but evokes them by means of the ritual of the old religion and sells his soul to obtain occult power form them. An example of such magic is provided in the religion of Yezidis, or ‘Worshippers of Satan.’ Though fully recognising the Magian dualisms, the sect pays homage only to the principle of evil.

Probably much of the magic of the Middle Ages was of this origin, and my be traced to an impious abuse of older theogonies. We propose to follow these decade developments in he chapter dealing with the position of the Cat in witchcraft.

The wonderful religion of the ancient Egyptians, like other creeds, was evolved from crude commencements. Originally this people had no conception of a soul. Life was a breath, a fluidic motive power which vanished suddenly when its possessor fell into that state which we call death, characterized by the absence of breath and movement, the cessation of consciousness, the corruption of the flesh, and final destruction for the body. The three first mentioned phenomena constantly occurred without bringing about the state of death, as in sleep, hypnotism, catalepsy, swooning, etc., in which, after a varying lapse of time the individual returned to life.

The only apparent difference between deep unconsciousness and death is that when the latter takes place decomposition follows. It was therefore an obvious inference from observed facts that if tit was possible to prevent decomposition, life would return tot he body, as it did when the sleeper awoke from his dreams.

Thus the Egyptians reasoned that death ought to be considered as a merely temporary suspension of life which might be remedied by the resources of magic, if these were applied before decomposition commenced. Hence their practice of mummifying and embalming the corpse, and employing magic ritual or Mysteries.

Although we are accustomed to-day to think of the moon, when personified, as feminine in gender, in many ancient religions it was represented by a masculine or hermaphrodite deity, and its association with a goddess was a development from the older idea.

We have already noted that the cat-headed goddess Bast is the feminine aspect of the creator-demiurge Ptah, the most ancient of all the gods. ‘The divine and primordial intelligence and wisdom,’ ‘He who is self-existent,’ the ‘Giver of Life.’ Ptah, as the primitive Egyptian conception of the personified sun, is said to have generated The Sacred Bull, Apis, the symbol of fecundity in Nature, by a ray of light. His name signifies ‘He who opens,’ and is suggestive of his dual functions as God of Life, and God of Death, the Opener of the dark prisons of the womb and of the tomb. Not only as the representative of the Sun, but also because of tis connection with Bast the cat was a secondary symbol of Ptah. In later Egyptian allegory, Osiris usurped the place of Ptah as the god of Life and reproduction, and, though a sun-god, was said to inhabit the Moon. Plutarch describes and Egyptian festival, entitled ‘The Ingress of Osiris into the Moon,’ which has a phallic significance. And in a Louvre papyrus referring to the supposed influence of the Moon on generation, we read: ‘Couplings and conceptions abound when he (Osiris-Lunus) is seen in Heaven on that day.'”

Read the book on The Internet Archive.