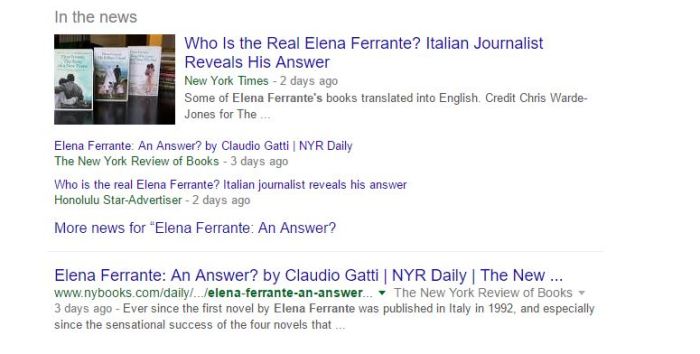 ‘For an anonymous author, Elena Ferrante is not stingy. She has given many interviews, usually through written correspondence, and furnished her critics with ample material to aid in their task of interpretation. She has shared her literary influences, her political views, an account of her process, and her working definition of literary truth. She has also explained ad nauseam her insistence on being “absent” as an author, her refusal to appear in public as Ferrante or publish under her given name. Her initial reason was shyness. “I was frightened at the thought of having to come out of my shell,” she told the Paris Review, a hesitation most writers will understand. (Writing, at least in theory, is the rare type of performance at which the timid, nervous, and physically ungainly can excel.) Over time, she came to embrace the implicit stance against publicity, the “self-promotion obsessively imposed by the media,” and the facile readings that author-worship tends to encourage. The trouble with reading biographically—as anyone who’s tried it can tell you—is how quickly it slips into reading symptomatically: search the author for clues to the novel and soon you’ll be searching the novel for clues to the author. It’s not a crime, to read this way, but it tends to foreclose other interpretive paths. It also mistakes the author for an analysand, the novel for a dream. Ferrante’s absence keeps things open: “Remove that individual [the author] from the public eye,” she said, and “we discover that the text contains more than we imagine.”

…For Ferrante, an author’s absence merely restored the basic conditions of literature to the public: it enabled the writer to write and the reader to read. There would be no time-consuming book tour or demoralizing spreads in the Thursday Styles section, where the women writers often go. (What is Elena Ferrante wearing? Can you imagine?) Nor would there be any irritating authority figure saying this or that character is really X, no obnoxious public presence we would have to square, somehow, with the beautiful things she wrote. The persona of the author is an intrusion on the solitary psychic space of a novel. By protecting her privacy, Ferrante protected ours.

Many attempts have been made to locate the “true” identity of Ferrante, some more aggressive than others. For more than a decade, Italian newspapers have argued that Ferrante was the novelist Domenico Starnone, citing thematic and stylistic resemblances between his fiction and hers. One academic called on researchers to use quantitative analysis, in the style of Franco Moretti, to substantiate the claim. After Ferrante was nominated for the prestigious (and rigged) Strega Prize for literature in 2015, the gossip blog Dagospia wrote, “Even the stones know that Elena Ferrante is Anita Raja,” Starnone’s wife.1 The prevalence of this rumor hasn’t stopped the latest unmasking from feeling like a fresh discovery. The investigative journalist Claudio Gatti’s “months-long investigation” into public real estate records in Rome makes the compelling case that Ferrante is, as the stones knew, Anita Raja. Gatti’s previous subjects include JP Morgan Chase and Silvio Berlusconi—targets more deserving of his skills. The article was rolled out in multiple languages simultaneously, like the NSA leak: “in English by NYR Daily, in Italian by Il Sole 24 Ore, in German by the Frankfurter Allgemeine Zeitung, and in French on the investigative website, Mediapart,” as the footnote read. Reporting on the reaction to Gatti’s story, the New York Times reached Ferrante’s publisher, Sandra Ozzola Ferri, for comment. “If someone wants to be left alone, leave her alone,” she said. “She’s not a member of the Camorra, or Berlusconi. She’s a writer and isn’t doing anyone any harm.”

Ferrante’s readers were quick to denounce Gatti’s revelation. I myself was irritated. Even the stones know that Ferrante is Ferrante, and that’s the way her readers want it. More than Ferrante herself, her readers have benefited from her choice, spared so much extradiegetic noise. We are as invested in her anonymity—and her autonomy—as she is. It is a compact: she won’t tell us, we won’t ask, and she won’t change her mind and tell us anyway. In exchange, she’ll write books and we’ll read them. The feminist defense of Ferrante’s privacy was especially swift. It’s difficult to read a man’s attempt to “out” a writer who has said she would stop writing if she were ever identified as anything but an attempt to make her stop writing.

“I believe that, today, failing to protect writing by guaranteeing it an autonomous space, far from the demands of the media and the marketplace, is a mistake,” Ferrante told the Financial Times last year. This is an uncontroversial truth. Writers need space to work. One word for this space is room; another is freedom; another is privacy. Each writer finds this space where she can. Woolf pragmatically emphasized the material: “give her a room of her own and five hundred a year, let her speak her mind and leave out half that she now puts in, and she will write a better book one of these days.” (She needed the metaphysical, too: “I need solitude,” Woolf wrote in her diaries. “I need space. I need air. I need the empty fields around me; and my legs pounding along roads; and sleep; and animal existence.”) Kafka found his space at night: “The burning electric light, the silent house, the darkness outside, the last waking moments, they give me the right to write even if it be only the most miserable stuff. And this right I use hurriedly. That’s the person I am.”’