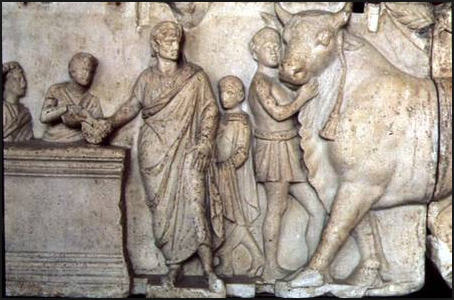 This book takes place in Pylos. Telemachus and Athena (disguised as Mentor) arrive and witness a religious ceremony in which 81 bulls are sacrificed to Poseidon. Afterwards, they meet with Nestor who relates what he knows about what happened to Odysseus after the Trojan War.

The number 9 appears several times in this book. First, at the ceremony, there are nine congregations and each one is offering nine bulls, for a total of 81 bulls. It is also worth noting that 81 in some forms of mystical numerology is broken down to 8+1 which again equals 9.

On the shore
black bulls were being offered by the people
to the blue-maned god who makes the islands tremble:
nine congregations, each five hundred strong,
led out nine bulls apiece to sacrifice,
taking the tripes to eat, while on the altars
thighbones of fat lay burning for the god.

One thought on ““Odyssey” by Homer: Book III – The Lord of the Western Approaches”