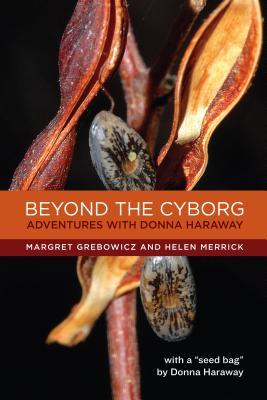 Contained in these briefest of sketches, however, are important keys to understanding the full intent of Haraway’s ironic myth. The Manifesto calls on SF in a number of ways. First, and crucially, looking to SF becomes a way of foregrounding and talking about the mythic elements of technoscience. Thee Manifesto is centrally concerned with a reconstruction of socialist-feminist politics “in the belly of the monster” -a drive that requires a “theory and practice addressed to the social relations of science and technology, including crucially the systems of myth and meanings structuring our imaginations” (Haraway 1991a: 163). For Haraway, SF is a useful tool for foregrounding such “systems of myth;’ especially if we export our SF reading practices to science and see both as stories about science.

SF in the Manifesto is also, of course, a key source for the figure of the cyborg itself. As in all her work, “grokking” the cyborg entails accepting the enmeshing of the material and semiotic, the “reality” of subjects described by science as well as their historical constructedness. Thus “the cyborg is a matter of fiction and lived experience” and Haraway’s cyborg, at least, sees its promise in the confusion of boundaries between organism and machine that seemed reified as part of the science/arts, nature/culture, human/animal binaries. The SF cyborgs Haraway cites as cogenitors are key for the way they “populate worlds ambiguously natural and
crafted” (Haraway 1991c:149). That is, the SF worlds writing cyborgs into being always skirt the im/possibility of the natural/artifactual dualism. It is in this sense that Haraway calls her feminist SF writers “theorists for cyborgs” and our “story-tellers exploring what it means to be embodied in high-tech worlds” (Haraway 1991c:173).

Key to Haraway’s approach in the Manifesto is the need to oppose a technophobic fear of the machine and instead accept the machinic-and the collapse of technological/organic boundaries-as part of our embodiment; “the machine is us, our processes, and aspect of our embodiment”(Haraway 1991c:180). These are, of course, not the only boundaries that must be challenged. Importantly, “cyborg monsters in feminist science fiction define quite different political possibilities and limits from those proposed by the mundane fiction of Man and Woman” (Haraway 1991c:180 )that is, our stories of sexual, gendered, and species divisions, amongst others. Haraway provides a whole list of oppositions and objects whose status as natural, given, universals is challenged in this work. “Thee cyborgs populating feminist science fiction make very problematic the statuses of man or woman, human, artefact, member of a race, individual entity or body” (Haraway 1991c:178). Indeed, most of the examples Haraway cites in the close of the Manifesto do not so much confuse the human/machine boundaries we commonly associate with the SF cyborg as they trouble these other problematic boundaries. Russ’s Female Man “refuse(s) the reader’s search for innocent wholeness” (Haraway 1991c:178); while Tiptree is called on for her “generations of male brood pouches and male nurturing”; Varley for his “mad goddess-planet-trickster-old womantechnological device” Gaea; and Butler for her black sorceresses, shapeshifters, mixed species and human-alien characters. 1here is human/technology interface here, certainly, but in the case of Tiptree, Varley, and Butler these are cyborgian monsters produced through biotechnology, and ones where the human/other boundary is polluted through intermingling between races, species, aliens, and animals. What all these texts have in common is the way in which they were consciously engaged in rewriting and revisioning both traditional SF narratives as well as broader scientific and social discourses. Most of the texts Haraway references were associated with the feminist utopian movement, however these visions were not-as some commentators persisted in arguing-blueprints for a real “elsewhere.”” Communion or joining with the alien or animal in feminist SF is not a desire to escape planet Earth and indulge in miscegenation, but a way of thinking differently about what it means to be human-to resist and warp the self-other dyad. The appeal of all these texts for a cyborg trickster figuration is their resistance to wholeness, unity, and innocence… The alien species, races, organisms, and machines populating these texts mean we cannot escape the fact that right from the beginning there was always more going on than the boys from Wired or the cyberpunks might have thought.

It is this destruction that “provokes the necessity of active rewriting as reading.”

Haraway-qua-reader feels compelled to rewrite not just the story itself but “the whole human and unhuman collective that is Lisa Foo” (that is: just as she has reread and rewritten the cyborg, oncomouse, or dogs). She uses this act or performance of rereading to make her real point, which  is about the aim and function of such rereadings, reappropriations, and reconfigurings. … This is, of course, precisely what Haraway does with her other figurations, including the cyborg: she rearticulates or redescribes them in order to foreground that which is hidden or foreclosed. “It’s not a ‘happy ending’ we need, but a non-ending” (Haraway 2004:no).

From Beyond the Cyborg: Adventures with Donna Haraway