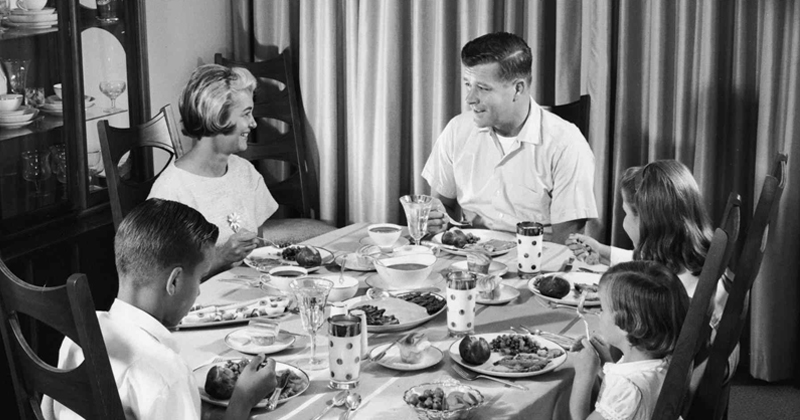 Tolstoy famously opened his magnum opus with the truthy formula “All happy families are alike; unhappy families are each unhappy in their own way.” It sounds good, concedes Ursula K. Le Guin: “It’s a great first sentence.” So many families are extremely unhappy! And this extreme unhappiness feels unique, because its structural character—like the structure of capitalism—is cunningly obscured from view.

In fact, Le Guin suggests, the reverse of Tolstoy’s apothegm is ultimately closer to the truth. She knows of what she speaks, having herself grown up “in a family that on the whole seems to have been happier than most.” She finds it “false—an intolerable cheapening of reality—simply to describe it as happy.” To her, the very phrase “happy families” bespeaks a fundamental incuriosity about the nature of happiness, which—under capitalism especially—comes with enormous costs.

Genres of family critique other than the bourgeois novel do exist, but they aren’t necessarily pretty. I’m thinking of the medium crawling with moms turned murderers, blood-spattered dining-rooms, incest revenges, and homes set ablaze: Hereditary, The Shining, Society, Goodnight Mommy, Psycho, The Stepfather, Us. Critical cinema scholars have long identified a latently insurrectionary desire at play in horror movies, especially those that depict attacks (often from within) on the propertied white family, the patriarchal regime of housework, or the colonial homestead. Books like Hearths of Darkness: The Family in the American Horror Film argue that violent and scary movie-making is, more often than not, a popular vehicle for mass anti-family desire.

Think of the menacing domestic interiors, hostile kitchen appliances, creepy children, murderous kin, and claustrophobic hellscapes of your favorite horror flick. In slasher, home-invasion, and feminist horror canons, the narrative pretends to worry nationalistically about external threats to the family while, in fact, indulging every conceivable fantasy of dismembering and setting fire to it from within. From gore to so-called “psychological” horror, diverse genres openly implicate the family-form in the tortures it is enduring. In these movies, the suppressed, disavowed violence of the home is returning home. The monster is coming from inside the house.

Wow, who am I calling monsters—dads and moms and great-aunt Trish? No: family abolition is not “puerile” politics (albeit children must be on the front lines of imagining it). Family abolition does not expect a state of perfect, uninterrupted, universal happiness. Rather, I would ask you to flip the script and consider that it is the family that is unrealistic and utopian. The family, right now, is supposed to make everybody happy. We are all supposed to be avatars of our little biological team of competitive social reproduction. When we are delinquent, we are a burden on the family: an experience which, ideally, reforms us by making us remember (like it’s a good thing) that family is all we’ve got. Even when we are exceptional, we are, in a sense, chips off our biogenetic clan’s block; something for blood relations to be proud of.

“In the study of lesbian history, the desire for proof is generally one the researcher doesn’t expect or even want to have satisfied. Queer research can feel like a secret club, where evidence is stored only within the blood that rushes from our bellies to our cheeks and is exchanged via intuition and rumor. When Shapland finds her proof, several years into researching McCullers, she’s overwhelmed by the verification of that which she’d known all along. Her girlfriend doesn’t share in her sense of shock. “‘Isn’t this what you were looking for?’” she asks. “‘Well,’” responds Shapland, “‘I didn’t think I’d actually find it.’”

…Which is to say, proof might be relevant, but it’s not the point. Often, the act of writing a biography is one on hand an attempt to uncover some previously unseen truth about a person, and on the other an effort to establish narrative or analytical meaning to the messiness of life. For Shapland, it’s more about finding a way to accept the mess in all its absences and utterances and to be honest with herself and her readers about what it is she wants from the archive. Ultimately, Shapland’s book aims to behold a woman she’ll never meet and to love her without laying claim.

The act of piecing ourselves together through each other shows up again and again in lesbian literature. Sure, it can fringe on enmeshment when done possessively and without regard for one’s own motivations, and that’s a stereotype that makes for a handful of easy punchlines. But all jokes aside (cue joke about humorless lesbians), what so often gets overlooked is the great possibility in considering self-creation as a collaborative work of love in which we carry the bodies of others within our own….The woman that the narrator loves is dead, but not. The narrator is the woman that she loves, but not. When we continually re-make ourselves and each other through intimacy, we’re never done becoming.”

“There are, of course, circumstances in which “girl” seems plainly derogatory (e.g., calling Hillary Clinton a girl) or plainly risible (e.g., Hillary calling herself one). A thoroughly unscientific survey of my woman card-carrying friends suggests that they find the term acceptable—if not always accurate—when they apply it to themselves, but intolerable coming from a man. “I find it irritating when used as a way to belittle women for performing their femininity, or when a man—especially an older man—uses it,” M. says. “I feel the exact same way about ‘ladies,’ actually. I’ve never heard it used in a way that doesn’t somehow imply we’re a coven coming for their testicles.”

In her twenties, C. regularly called herself a girl, but she no longer feels the term applies. “The year I turned thirty also happened to be the year that I gave birth. So I think that probably also had something to do with the transition: You can’t be a girl if you’re a girl’s mother.”

If there is a thematic message encoded in the “girl” narratives, I think this is its key: the transition from girlhood to womanhood, from being someone to being someone’s wife, someone’s mother. Girl attunes us to what might be gained and lost in the transformation, and raises a possibility of reversion. To be called “just a girl” may be diminishment, but to call yourself “still a girl,” can be empowerment, laying claim to the unencumbered liberties of youth. As Gloria Steinem likes to remind us, women lose power as they age. The persistence of girlhood can be a battle cry.

If you don’t hate Hannah Horvath, you know someone who does. Self-centered, self-absorbed, financially and sexually reckless, aggressively responsible to no one but herself, the protagonist of Girls is—at least for a vocal segment of the internet commentariat—female “adultescence” pushed to nightmare extreme. (Emphasis on female; we love to love the dysfunctional boys of Girls.) In fairness, the girls are dysfunctional narcissists whose efforts to impersonate grown-up women—via romantic commitment, child nurturing, professional advancement—inevitably blow up, occasionally with mass casualties. Admission of bias: I love them all. I love Hannah the most.

Judd Apatow made his name as the patron saint of overgrown lost boys, and he’s now using it to help women like Lena Dunham create her female Peter Pans. Shockingly, audiences prefer their charming schlubs to look like Seth Rogen; schlubby women are another story. Especially schlubby women who have lots of sex and show no inclination to take care of anyone but themselves.

In the pilot episode, Hannah’s parents cut her off financially, a moment often mustered as evidence of the character’s childishness. Instead, it’s the opposite, catalyst for a series about how to live as a grown-up, without losing the best parts of yourself. It’s this insistence on the latter—admittedly sometimes to the exclusion of etiquette or basic human decency—that mandates the title of the show. The girls aren’t Girls simply because they’re immature, but because they’re still walking question marks. They’re still busy, as Hannah says in the pilot, trying to become who they are.

Here’s how Louis CK draws the distinction between girl and woman:

[22-year old girls] might say, I’m 22, I’m totally a woman… Not to me, sorry. To me you’re not a woman until you’ve had a couple of kids and your life is in the toilet… when you become a woman is when people come out of your vagina and step on your dreams.

If it’s easy to see how the girl label attaches to unmoored millennials, it’s less evident how it applies to women firmly rooted in the adult phase of life. But it makes sense if we read the “girl” narratives as corrective to the Louis CK threshold, the “girls” as women who refuse to let a little thing like people coming out of their vaginas ruin their dreams.

All the Single Ladies, journalist Rebecca Traister’s recent take on the rise of the single woman, opens with her childhood conviction that the marriage plot was less fairy tale than Shakespearean tragedy. “It was supposed to be romantic, but it felt bleak,” she writes of the nuptial trajectories of her girlhood literary heroes. “Paths that were once wide and dotted with naughty friends and conspiratorial sisters and malevolent cousins, with scrapes and adventures and hopes and passions, had narrowed and now seemed to lead only to the tending of dull husbands and the rearing of insipid children to whom the stories would be turned over.”

The girl books crowding the nonfiction shelf are written by and about women who insist on sticking to that wide path, women who refuse to Jo March themselves into a supporting role in their own life: girlhood as a state of mind.”