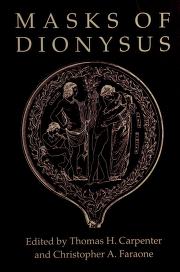 “Normally, in ritual, Dionysus as a god of communality draws women out of the household, inspiring them with a temporary, controlled resistance to public gender division. In this way he counters the two antithetical threats to the polis — offsetting excessive adherence to the household by bringing the women out from the their homes, and gender confusion by bringing them out for only a temporary, controlled period. Because he is honored by the while polis, Dionysus both presents a latent threat to the household and, if deprived of that honor, will destroy the gender division which the polis is based. Indeed, fi Dionysus is resisted, both threats are activated. Female adherence to the household is violently revised by a frenzy in which women leave their homes and even destroy their families. And this frenzy also endangers male control of the public sphere….”