“…In short, sexual desire for female beauty was intimately linked, in our mythological unconscious, with an initial ac of sundering and separation. Without castration there could be no sense of that lack, difference or otherness which is so indispensable to the workings of eros. Indeed, we find countless allusions to the amorous, venal and sometimes lecherous character of the melancholic throughout the ages.

The identification of Kronos-Saturn with ‘time’ is more than a phonetic coincidence (Kronos-chronos). The [melancholic] is intimately related to the dread produced in mortals by the scythe of Time the Reaper — i.e. by that separation of all separations, death. The ‘chronological’ character of melancholy is thus captured in Kronos’ threefold act of devouring, substitution and castration, each of which represents a fundamental aspect of time. Indeed another way to read this myth would be to emphasize the futility of Kronos’ efforts to remain eternal by reversing time, drawing is progeny back into himself: an act of monstrous self-absorption punished by the inevitable passage of time as both substitution  (one moment replacing another) and castration (the cutting of the illusion of phallic self-sufficiency).

In other words, to the extent that Kronos destroys he is himself destroyed. Kronos is the destroyed destroyer, just as he is the castrated castrator. This paradoxical character of the Kronos-Saturn figure is further underscored, moreover, by the fact that the experience of sundering can also give rise to reactivity. The inaugural myths of castration lead not only to the survival and empowerment of the greatest Olympian deity — Zeus — but also to the birth of beauty and desire (Venus rising from the waves bloodied by castrated genitals). In this reading cyclical time which seeks to return itself gives way to chronological time which acknowledges the ineluctability of historical transience and mortality. It is the virtue of wisdom, capable of accepting the ruptures of mortal existence, which lies at the root of the visual representations of Saturn as elderly sage and resigned soverign. Disenchanted with the narcissistic ideal of self-plenitude, the creative melancholic is one who re-experiences the world without illusion, that is, with eyes capable of seeing otherwise.

According to this Saturnine narrative, in sum, the artist is one who lets go of the ego in order to rediscover him-or herself anew. Working through melancholy towards a form of productive mourning, the artist becomes like a wise Olympian deity, a curious ‘gaiety transfiguring all that dread’ (Yeats). This more upbeat legacy runs from certain ideas of classical antiquity up to the middle ages an early Renaissance, as witnessed in countless sculptures, frescoes, murals and portraits depicting Melancholia as creative thinker, head on hand, calmly embracing death. This is the melancholic mind that authentically accepts its ‘being-toward-death’ (Heidegger). Or to use psychoanalytic language, it is the nationalistically wounded soul that has undergone ‘symbolic castration’ and acknowledged its incorrigible and ultimately insatiable condition as ‘want-to-be’…The melancholic moves from destruction to creation by accepting his/her own death. Darkness encountered and traversed becomes a source of new light, a ‘black sun’. Hence the proliferation through the Western visual tradition of images of the castrated-castrating Kronos holding aloft a sickle, scythe or dragon of time biting its own tail. Unless, these symbols suggest, we embrace our mortality as a limit-experience of irreversible loss, we cannot transform the disease of melancholy into healing insight.”  – Richard Kearney in Strangers, Gods and Monsters. 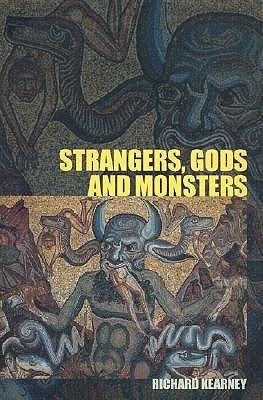