So, our favorite part of Saga Vol. 2 was the part where Alana tries to get her so-called “Work Friend” to read a novel so that they can both talk about it. Alana tries to sell the novel as: “They mostly just hang out and play board games, except sometimes they leave their apartment to eat…” As seen in exhibit A: 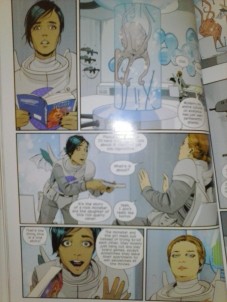 After work-friend’s resting bitch-face, this happened:

Ugh, and please don’t comment on the crappy phone pics of the pages. They’re just there to give you a general idea. Don’t get your panties in a wad. We’re writers, not photographers. Geez.

See also: Chekov and the setting of simplicity.